A sneeze (छींक), or sternutation (छींकना), is a semi-autonomous, convulsive expulsion of air from the lungs through the nose and mouth, usually caused by foreign particles irritating the nasal mucosa. A sneeze expels air forcibly from the mouth and nose in an explosive, spasmodic involuntary action resulting chiefly from irritation of the nasal mucous membrane. This action allows mucus to escape through the nasal cavity. Sneezing is possibly linked to sudden exposure to bright light, a sudden change in temperature, the breeze of cold air, a particularly full stomach, or viral infection, and can lead to the spread of disease. Siddha Spirituality of Swami Hardas Life System wishes our readers to know about a sneeze, types, causes, treatment, home remedies, prevention, sneeze guard, sneeze during sex, epidemiology, and sneeze culture, etc.

Making a sudden involuntary expulsion of air from the nose and mouth due to irritation of one’s nostrils.

Though sneezing is very common, you may not have noticed that there are several types of sneezing. This classification, though interesting, does not have any clinical significance.

Sometimes, however, dirt and debris can enter your nose and irritate the sensitive mucous membranes inside your nose and throat. When these membranes become irritated, it causes you to sneeze.

A sneeze can be triggered by a variety of things, including:

Allergies are an extremely common condition caused by your body’s response to foreign organisms. Under normal circumstances, your body’s immune system protects you from harmful invaders such as disease-causing bacteria.

If you have allergies, your body’s immune system identifies typically harmless organisms as threats. Allergies can cause you to sneeze when your body tries to expel these organisms.

Infections caused by viruses such as the common cold and flu can also make you sneeze. There are more than 200 different viruses that can cause the common cold. However, most colds are the result of the rhinovirus.

Other, less common causes of sneezing include:

Nasal sprays that have a corticosteroid in them reduce inflammation in your nasal passages and decrease the frequency of sneezing. People with allergies often use these sprays. In most cases, when you have allergic rhinitis: You sneeze again and again, especially after you wake up in the morning.

There is no cure for sneezing. One of the best things you can do is to avoid the things that cause your allergies. You may need to clean your house often to get rid of dust, animal dander, or molds. Or you may need to stay indoors when pollen counts are high.

Unless you have another health problem, such as asthma, you may take over-the-counter medicines to treat your symptoms at home. If you do have another problem, talk to your doctor first. Others who also should talk to their doctor before starting self-treatment include older adults, children, and women who are pregnant or breastfeeding.

If your allergies bother you a lot and you cannot avoid the things you are allergic to, immunotherapy may help prevent or reduce your symptoms.

One of the best ways to keep from sneezing is to avoid things that trigger you to sneeze. You can also make some simple changes in your home to reduce irritants.

Change the filters on your furnace to keep your home’s filtration system working properly. If you have pets that shed, you might consider cutting their hair or removing them from the home if their fur bothers you too much.

You can kill dust mites on sheets and other linens by washing them in hot water, or water over 130°F (54.4°C). You might also decide to purchase an air filtration machine to clean the air in your home.

A sneeze guard or sneezeguard is a plastic or glass screen designed to protect food from contamination. Sneeze guards are common in restaurants and buffets and prevent pathogens from entering food through sneezing.

The sneeze guard was patented in 1959 by restaurateur Johnny Garneau as a “Food Service Table”. By the early 1960s, the FDA mandated the presence of food guards. Similar regulations were subsequently adopted by all 50 U.S. states.

Proven methods to reduce sneezing generally advocate reducing interaction with irritants, such as keeping pets out of the house to avoid animal dander; ensuring the timely and continuous removal of dirt and dust particles through proper housekeeping; replacing filters for furnaces and air-handling units; air filtration devices and humidifiers; and staying away from industrial and agricultural zones. Some people, however, find sneezes to be pleasurable and would not want to prevent them.

Examples of preventive techniques are the deep exhalation of the air in the lungs that would otherwise be used in the act of sneezing, holding the breath in while counting to ten or gently pinching the bridge of the nose for several seconds. Tilting the head back can stop a sneeze.

While generally harmless in healthy individuals, sneezes spread disease through the infectious aerosol droplets, commonly ranging from 0.5 to 5 µm. A sneeze can produce 40,000 droplets.

To reduce the possibility of this spreading disease, one holds the forearm or the inside of the elbow in front of one’s mouth and nose when sneezing.

In Indian culture, especially in northern parts of India, Bengali (Bangladesh and Bengal of India) culture and also in Iran, it has been a common superstition that a sneeze taking place before the start of any work was a sign of impending bad interruption. It was thus customary to pause in order to drink water or break any work rhythm before resuming the job at hand in order to prevent any misfortune from occurring.

Contrarily, in Polish culture, especially in the Kresy Wschodnie borderlands, a popular belief persists that sneezes may be an inauspicious sign that one’s mother-in-law speaks ill of their son-in-law at that moment. The same phenomenon is thought to correspond to daughters-in-law and their mothers-in-law. As with other Catholic countries, such as Mexico, Italy, or Ireland, the remnants of pagan culture are fostered in Polish peasant idiosyncratic superstitions.

The practice among Islamic culture, in turn, has largely been based on various prophetic traditions and the teachings of the prophet Muhammad. An example of this is Al-Bukhaari’s narrations from Abu Hurayrah that Muhammad once said:

When one of you sneezes, let him say, “Al-hamdu-Lillah” (Praise be to God), and let his brother or companion say to him, “Yarhamuk Allah” (May God have mercy on you). If he says, “Yarhamuk-Allah”, then let [the sneezer] say, “Yahdeekum Allah wa yuslihu baalakum” (May God guide you and rectify your condition).

Some people may sneeze during the initial phases of sexual arousal. Doctors suspect that the phenomenon might arise from a case of crossed wires in the autonomic nervous system, which regulates a number of functions in the body, including “waking up” the genitals during sexual arousal. The nose, like the genitals, contains erectile tissue. This phenomenon may prepare the vomeronasal organ for increased detection of pheromones.

A sneeze has been compared to orgasm since both orgasms and sneezes reflexes involve tingling, bodily stretching, tension, and release. On this subject, sexologist Vanessa Thompson from the University of Sydney states, “Sneezing and orgasms both produce feel-good chemicals called endorphins but the amount produced by a sneeze is far less than an orgasm.”

Sneezing while menstruating may result in a sudden vaginal menses emission.

Many animals including cats, dogs, chickens, and iguanas sneeze. African wild dogs use sneezing as a form of communication, especially when considering a consensus in a pack on whether or not to hunt. Some breeds of dogs are predisposed to reverse sneezing. 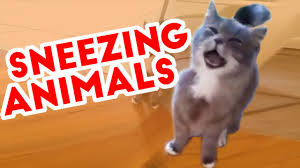 7 thoughts on “Sneeze and Sneeze Culture”