Sleep paralysis (निद्रा पक्षाघात) is when, during waking up or falling asleep, a person is aware but unable to move or speak. During an episode, one may hallucinate i.e. hear, feel, or see things that are not there, which often results in fear. Episodes generally last less than a couple of minutes. It may occur as a single episode or be recurrent. Between 8% and 50% of people experience sleep paralysis at some time. Sleep paralysis has been described throughout history. Approximately 36% of the general population that experiences isolated sleep paralysis is likely to develop it between 25 and 44 years of age. The experience of sleep paralysis being of fearful nature, Siddha Spirituality of Swami Hardas Life System is of the opinion that everyone should read this article for well-being.

The main symptom is being unable to move during awakening. Imagined sounds are reported during sleep paralysis such as:

These symptoms are usually accompanied by intense emotions such as fear and panic. People also have sensations of being dragged out of bed or of flying, numbness, and feelings of electric tingles or vibrations running through their bodies.

Sleep paralysis may include hypnagogic hallucinations, such as a supernatural creature suffocating or terrifying the individual, accompanied by a feeling of pressure on one’s chest and difficulty breathing. Another example of a hallucination involves a menacing shadowy figure entering one’s room or lurking outside one’s window, while the subject is paralyzed. 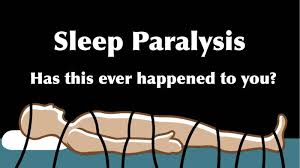 The pathophysiology has not been concretely identified, although there are several theories about its cause. The first of these stems from the understanding that sleep paralysis is a parasomnia resulting from dysfunctional overlap of the REM and waking stages of sleep.

Polysomnographic studies found that individuals who experience sleep paralysis have shorter REM sleep latencies than normal along with shortened NREM and REM sleep cycles, and fragmentation of REM sleep. This study supports the observation that disturbance of regular sleeping patterns can precipitate an episode of sleep paralysis.

Under normal conditions, medial and vestibular nuclei, cortical, thalamic, and cerebellar centers coordinate things such as head and eye movement, and orientation in space.

In individuals reporting sleep paralysis, there is almost no blocking of exogenous stimuli, which means it is much easier for a stimulus to arouse the individual. There may also be a problem with the regulation of melatonin, which under normal circumstances regulates the serotonergic neural populations. Melatonin is typically at its lowest point during REM sleep.

As the correlation with REM sleep suggests, the paralysis is not complete: use of EOG traces shows that eye movement is still possible during such episodes; however, the individual experiencing sleep paralysis is unable to speak.

Research has found a genetic component in sleep paralysis. The characteristic fragmentation of REM sleep, hypnopompic, and hypnagogic hallucinations have a heritable component in other parasomnias, which lends credence to the idea that sleep paralysis is also genetic.

Sleep paralysis includes some of the following hallucinations:

A hyper-vigilant state created in the midbrain may further contribute to hallucinations. More specifically, the emergency response is activated in the brain when individuals wake up paralyzed and feel vulnerable to attack. This helplessness can intensify the effects of the threat response well above the level typical of normal dreams, which could explain why such visions during sleep paralysis are so vivid. The threat-activated vigilance system is a protective mechanism that differentiates between dangerous situations and determines whether the fear response is appropriate.

A neurological explanation holds that this results from a combination of the threat vigilance activation system and the muscle paralysis associated with sleep paralysis that removes voluntary control of breathing. Several features of REM breathing patterns exacerbate the feeling of suffocation. These include shallow rapid breathing, hypercapnia, and slight blockage of the airway, which is a symptom prevalent in sleep apnea patients.

Episodes can occur in the context of several medical conditions e.g. narcolepsy, hypokalemia. Episodes, regardless of classification, are generally short (1–6 minutes), but longer episodes have been documented. With RISP the individual can also suffer back-to-back episodes of sleep paralysis on the same night, which is unlikely in individuals who suffer from ISP.

The risk factors include insomnia, sleep deprivation, an erratic sleep schedule, stress, and physical fatigue. Sleeping in the supine position it is possible for the soft palate to collapse and obstruct the airway. This is a possibility regardless of whether the individual has been diagnosed with sleep apnea or not.

While many factors can increase the risk for ISP or RISP, they can be avoided with minor lifestyle changes.

Medical treatment starts with education about sleep stages and the inability to move muscles during REM sleep. People should be evaluated for narcolepsy if symptoms persist. The safest treatment for sleep paralysis is for people to adopt healthier sleeping habits. However, in more serious cases tricyclic antidepressants or selective serotonin reuptake inhibitors (SSRIs) may be used. Despite the fact that these treatments are prescribed there is currently no drug that has been found to completely interrupt episodes.

Though no large trials have taken place which focus on the treatment of sleep paralysis, several drugs have promise in case studies. Two trials of GHB for people with narcolepsy demonstrated reductions in sleep paralysis episodes.

Some of the earliest work in treating sleep paralysis was done using a culturally sensitive cognitive-behavior therapy called CA-CBT. The work focuses on psycho-education and modifying catastrophic cognitions about the sleep paralysis attack. This approach has previously been used to treat sleep paralysis in Egypt, although clinical trials are lacking.

Everybody must practice Siddha preventive measures, whether a person is affected with sleep paralysis or not, but preventive measures are the primary steps for switching on to any other Siddha energy remedies, and hence they are important. It helps in one’s capability, effectiveness, and productivity, decision making power, intellectuality and removing minor health problems. There are three types of preventive measures:

This unique Siddha Shaktidata Yog of Siddha Spirituality can solve the problems related to sleep paralysis with free Siddha energy remedies. There is no compulsion of training of ‘Swami Hardas Life System’ methods. This not only gives benefits to self but also it can be used for other affected persons, whether a person is in the same house, distantly available in the same city, same nation or might be in any corner of the world, however, both the procedures have been explained here.

Recite this Sadhana with a Sankalp “My problems of sleep paralysis are solved as early as possible and I should gain health”, which should be repeated in mind 3 – 3 times every after each stanza. Any person irrespective of caste, creed, religion, faith, sex, and age can recite this Sadhana for free, which should be repeated at least twice in a day. To know more, please click on this link.

These products work on the concepts of ‘Conceptual Creative Positive Energy’ (CCPE) within the provisions of the ‘CCPE Life System’ and the theory of Quantum Technology to a certain extent. However, the products get activated only whenever touched by a human and then they become capable of solving the problem and achieving health. However, please use these products for sleep paralysis as mentioned below:

CCPE Booster: Keep one Booster over the Agya Chakra and another one each over the head for 3 minutes. You may need to have 2 Boosters, which establishes positivity.

In general, a daily routine to manage sleep paralysis includes:

Ensure to sprinkle in some fun during the day, however, don’t forget to relax and laugh in between. Laughing is a great way to boost your immune system and help you.

In view of the above, I am confident that you have learned about sleep paralysis, symptoms, pathophysiology, prevention, epidemiology, diagnosis, treatment, and learned effective free Siddha energy remedies. Now, you have become self-sufficient, hence its right time to use your acquired knowledge for solving problems as per the provision available in Siddha Spirituality of Swami Hardas Life System.

After reading this article, what are your thoughts? Infact, I believe in sharing knowledge. Can I expect you to let me know your precious thoughts?