Attention deficit hyperactivity disorder (ADHD) [ध्यान अभाव अतिसक्रियता विकार] is a mental disorder of the neurodevelopmental type. It is characterized by difficulty paying attention, excessive activity and acting without regard to consequences, which are otherwise not appropriate for a person’s age. Some individuals with ADHD also display difficulty regulating emotions. In children, problems paying attention may result in poor school performance. Additionally, there is an association with other mental disorders and substance misuse. Siddha Spirituality of Swami Hardas Life System appeals to our valuable readers to know about Attention deficit hyperactivity disorder in-depth for well-being.

A disorder in which a person is unable to control behavior due to difficulty in processing neural stimuli, accompanied by an extremely high level of motor activity. ADHD can affect children and adults, but it is easiest to perceive during schooling. A child with ADHD may be extremely distractible, unable to remain still, and very talkative, which is diagnosed by using a combination of parent and/or patient interviews, observation of the patient, and sometimes the use of standardized screening instruments. Treatments include making adjustments to the environment to accommodate the disorder, behavior modification, and the use of medications. Stimulants are the most common drugs used, although certain other medications can be effective.

According to the fifth edition of the Diagnostic and Statistical Manual of Mental Disorders (DSM-V), symptoms must be present for six months or more to a degree that is much greater than others of the same age and they must cause significant problems functioning in at least two settings e.g. social, school/work, or home. The criteria must have been met prior to age twelve in order to receive a diagnosis of ADHD. This requires more than 5 symptoms of inattention or hyperactivity/impulsivity for those under 17 and more than 4 for those over 16 years old.

ADHD is divided into three subtypes, which include:

This type includes the following symptoms:

This type includes the following symptoms:

Girls with ADHD tend to display fewer hyperactivity and impulsivity symptoms but more symptoms pertaining to inattention and distractibility. Symptoms of hyperactivity tend to go away with age and turn into “inner restlessness” in teens and adults with ADHD. People with ADHD of all ages are more likely to have problems with social skills, such as social interaction and forming and maintaining friendships. This is true for all subtypes.

In children, ADHD occurs with other disorders about two-thirds of the time. Some commonly associated conditions include:

Certain studies have found that people with ADHD tend to have lower scores on intelligence quotient (IQ) tests. The significance of this is controversial due to the differences between people with ADHD and the difficulty determining the influence of symptoms, such as distractibility, on lower scores rather than intellectual capacity.

Studies of adults suggest that negative differences in intelligence are not meaningful and may be explained by associated health problems.

Most ADHD cases are of unknown causes. It is believed to involve interactions between genetics, the environment, and social factors. Certain cases are related to previous infection or trauma to the brain.

People with Down syndrome are more likely to have ADHD.

In addition to genetics, some environmental factors might play a role in causing ADHD. Alcohol intake during pregnancy can cause fetal alcohol spectrum disorders which can include ADHD or symptoms like it. Children exposed to certain toxic substances, such as lead or polychlorinated biphenyls, may develop problems that resemble ADHD.

Exposure to the organophosphate insecticides chlorpyrifos and dialkyl phosphate is associated with an increased risk; however, the evidence is not conclusive. Exposure to tobacco smoke during pregnancy can cause problems with central nervous system development and can increase the risk of ADHD.

The youngest children in a class have been found to be more likely to be diagnosed as having ADHD, possibly due to their being developmentally behind their older classmates. This effect has been seen across a number of countries. They also appear to use ADHD medications at nearly twice the rate as their peers.

In some cases, the diagnosis of ADHD may reflect a dysfunctional family or a poor educational system, rather than problems with the individuals themselves. In other cases, it may be explained by increasing academic expectations, with a diagnosis being a method for parents in some countries to get extra financial and educational support for their child. Typical behaviors of ADHD occur more commonly in children who have experienced violence and emotional abuse.

ADHD is diagnosed by an assessment of a child’s behavioral and mental development. It often takes into account feedback from parents and teachers with most diagnoses begun after a teacher raises concerns.

Associated conditions that should be screened for include:

Some ADHD symptoms in adults differ from those seen in children. While children with ADHD may climb and run about excessively, adults may experience an inability to relax, or they talk excessively in social situations. Addictive behavior such as substance abuse and gambling are common. 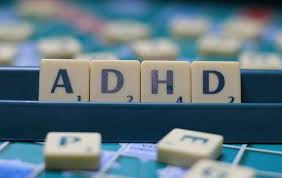 The management of ADHD typically involves counseling or medications either alone or in combination. While treatment may improve long-term outcomes, it does not get rid of negative outcomes entirely. Medications used include stimulants, atomoxetine, alpha-2 adrenergic receptor agonists, and sometimes antidepressants. In those who have trouble focusing on long-term rewards, a large amount of positive reinforcement improves task performance. ADHD stimulants also improve persistence and task performance in children with ADHD.

There is good evidence for the use of behavioral therapies in ADHD and they are the recommended first-line treatment in those who have mild symptoms or are preschool-aged. Psychological therapies used includes:

Parent training may improve a number of behavioral problems including oppositional and non-compliant behaviors. It is unclear if neurofeedback is useful.

Parent-teacher ratings of behavioral and socio-emotional outcomes in response to regular aerobic exercise include:

Stimulant medications are the pharmaceutical treatment of choice. They have at least some effect on symptoms, in the short term, in about 80% of people. Methylphenidate appears to improve symptoms as reported by teachers and parents. Stimulants may also reduce the risk of unintentional injuries in children with ADHD.

There are a number of non-stimulant medications, such as atomoxetine, bupropion, guanfacine, and clonidine that may be used as alternatives, or added to stimulant therapy. There are no good studies comparing the various medications.

Dietary modifications are not recommended as of 2019 by the American Academy of Pediatrics due to insufficient evidence. Though some evidence supports benefit in a small proportion of children with ADHD. A 2013 meta-analysis found less than a third of children with ADHD see some improvement in symptoms with free fatty acid supplementation or decreased eating of artificial food coloring. These benefits may be limited to children with food sensitivities or those who are simultaneously being treated with ADHD medications.

Everybody must practice Siddha preventive measures, whether a person is affected with attention deficit hyperactivity disorder (ADHD) or not, but preventive measures are the primary steps for switching on to any other Siddha energy remedies, and hence they are important. It helps in one’s capability, effectiveness, and productivity, decision making power, intellectuality and removing minor health problems. There are three types of preventive measures:

This unique Siddha Shaktidata Yog of Siddha Spirituality can solve the problems related to attention deficit hyperactivity disorder (ADHD) with free Siddha energy remedies. There is no compulsion of training of ‘Swami Hardas Life System’ methods. This not only gives benefits to self but also it can be used for other affected persons, whether a person is in the same house, distantly available in the same city, same nation or might be in any corner of the world, however, both the procedures have been explained here.

Recite this Sadhana with a Sankalp “My problems of attention deficit hyperactivity disorder (ADHD) are solved as early as possible and I should gain health”, which should be repeated in mind 3 – 3 times every after each stanza. Any person irrespective of caste, creed, religion, faith, sex, and age can recite this Sadhana for free, which should be repeated at least twice in a day. To know more, please click on this link.

Along with all the above activities, apply above explained free Siddha energy remedies minimum 3 times a day, the more is good. Just try the methods of Siddha Spirituality of Swami Hardas Life System. I am confident that you will surely find improvements within 3 days.

In view of the above, I am confident that you have learned about attention deficit hyperactivity disorder (ADHD), definition, symptoms, causes, diagnosis, management/treatment, and free Siddha energy remedies. Now, you have become self-sufficient, hence its right time to use your acquired knowledge for solving problems as per the provision available in Siddha Spirituality of Swami Hardas Life System. However, keep learning and practicing the free Siddha Energy Remedies, which would help guide how to solve various problems regarding health, peace, and progress, without money and medicines.

After reading this article, how would you rate it? Would you please share the knowledge with others and let me know your precious thoughts?