Sattvic diet (सात्विक आहार) is a diet based on foods in ayurvedic and yogic literature that contain the quality (guna) sattva. A sattvic diet can also exemplify the religious principle Ahimsa, the doctrine of non-violence, or not causing harm to other living things, which is one reason that Yogis often follow a sattvic diet (vegetarian diet). In this system of dietary classification, foods that decrease the energy of the body are considered tamasic, while those that increase the energy of the body are considered rajasic. Siddha Spirituality of Swami Hardas Life System considers the sattvic diet more beneficial than other types for making our life glorious. Hence read about all three types of diets in detail including benefits of the sattvic diet.

The Sattvic diet, also called the Yogic diet, is a way of eating in which individuals choose to consume foods with sattvic characteristics or qualities. 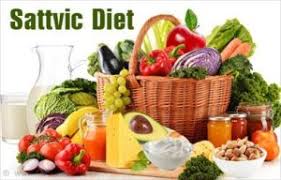 Fresh nuts and seeds that have not been overly roasted and salted are good additions to the sattvic diet in small portions. Choices include almonds (especially when soaked in water overnight and then peeled), hemp seeds, coconuts, pine nuts, walnuts (Akhrot), sesame seeds (til), pumpkin seeds and flax seeds. Red palm oil is considered to be highly sattvic.

Oils should be of good quality and cold-pressed. Some choices are olive oil, sesame oil, and flax oil. Most oils should only be eaten in their raw state, but some oils like ghee, sesame oil, palm oil, and coconut oil can be used in cooking.

Fruits are the major part of the sattvic diet and all fruits are sattvic.

Milk must be obtained from an animal that has a spacious outdoor environment, an abundance of pasture to feed on, water to drink, is treated with love and care, and is not pregnant. The milk may only be collected once the mother’s calf has its share.

Dairy products like yogurt and cheese (paneer) must be made that day, from milk obtained that day. Butter must be fresh daily as well, and raw, but ghee (clarified butter) can be aged forever and is great for cooking. Freshness is key with dairy. Milk should be freshly milked from a cow.

Milk that is not consumed fresh can be refrigerated for one to two weeks in its raw state but must be brought to a boil before drinking, and drunk while still hot/warm. Pasteurization, homogenization, and the use of GMOs and pesticides are all considered poisonous to humans—as is the consumption of milk from cows that are treated poorly, and consuming cold milk.

Most mild vegetables are considered sattvic. Pungent vegetables like hot peppers, leek, garlic, and onion are excluded, as are gas-forming foods such as mushrooms (tamasic, as are all fungi). Some consider tomatoes, peppers, and eggplants as sattvic, but most consider the Allium family (garlic, onion, leeks, shallots), as well as fungus (yeasts, molds, and mushrooms) as not sattvic.

Potatoes and rice are considered highly sattvic. The classification of whether something is sattvic or not is defined largely by the different schools of thought, and – even then – individually, depending on the understanding and needs of practitioners. Sometimes the given nature of certain foods can be neutralized by careful preparation. A practice is to drink freshly made vegetable juices for their prana, live enzymes, and easy absorption.

Whole grains provide nourishment. Some include organic rice, whole wheat, spelled, oatmeal and barley. Sometimes the grains are lightly roasted before cooking to remove some of their heavy quality. Yeasted bread is not recommended unless toasted.

Wheat and other grains can be sprouted before cooking as well. Some preparations are:

Sometimes yogis will fast from grains during special practices.

Legumes combined with whole grains can offer a complete protein source. Some yogis consider the mung bean to be the only sattvic legume. Convalescent food in ayurvedic diet includes Yusha soups made with lentils.

Most yogis use raw honey (often in combination with dairy), jaggery, or raw sugar (not refined). Others use alternative sweeteners, such as stevia or stevia leaf. In some traditions, sugar and/or honey is excluded from the diet, along with all other sweeteners.

Sattvic spices are herbs/leaves, including basil (Tulsi) and coriander.

All other spices are considered either rajasic or tamasic. However, over time, certain Hindu sects have tried to classify a few spices as Sattvic. It is however considered as inappropriate by purists.

Rajasic spices like black pepper (Kaali Mirch in Hindi) and red pepper are normally excluded but are sometimes used in small amounts. Salt is good in strict moderation, but only unrefined salts, like Himalayan salt or unbleached sea salt, not iodized salt.

Other herbs are used to directly support sattva in the mind and in meditation. These include:

Stimulant foods, also called mutative foods, mutable foods or rajasic foods, are foods that often provoke mental restlessness. They are not completely beneficial, nor are they harmful, to body or mind. Foods that cannot be categorized as either sentient or static are classified in this food group.

These foods cause aggressive and dominating thoughts, especially towards others.

Stimulant foods energize and develop the Manipura (navel) chakra and body but do not promote advancement in the higher chakras.

Such foods include caffeinated drinks such as:

Sedative foods also called static foods, or tamasic foods, are foods whose consumption, according to Yoga, are harmful to either mind or body. Harm to mind includes anything that will lead to a duller, less refined state of consciousness. Bodily harm includes any foods that will cause detrimental stress to any physical organ, directly or indirectly.

They are, however, sometimes necessary during times of great physical stress and pain. They help dull the pain and lower consciousness, allowing the body to repair itself.

Static foods stimulate and strengthen the lower two chakras, but will not assist in beneficial development of the higher chakras. In fact, they are usually detrimental to the advancement of higher chakras.

Viruddha (Incompatible foods) are considered to be a cause of many diseases. In the Charaka Samhita, a list of food combinations considered incompatible in the sattvic system is given. Such incompatibilities may not have an influence on a person who is strong, exercises sufficiently, and has a good digestive system.

Some combinations that are considered incompatible include:

Sattvic or Yogic diet benefits the body, mind, and soul in innumerable ways. Few of them include:

In the sattvic diet, it is a rule to start the day with a glass of warm water with lemon juice in it. This cleanses the body and helps it to get rid of harmful toxins. By the process of regular detoxification, organs in the body can function well, as a result of which the body is devoid of ailments and diseases.

The sattvic diet not only keeps one physically fit but also mentally agile. It is a diet which balances the body, mind, and soul, thereby resulting in longevity of life in an individual.

The sattvic diet believes in eating in moderation, therefore the yoga diet for weight loss is one of the best ways to lose fat, and it also strengthens your body’s immunity power at the same time. Following the diet along with a few minutes of yoga, pranayama or some physical activity will keep you away from all types of lifestyle diseases like:

Sattvic diet includes green leafy vegetables, fruits, and sprouts and is devoid of heat-inducing foods like meat, fish, onion, garlic, etc. Therefore, it does not take much of hard work for the digestive system to digest the food; the end result of which is proper bowel movement, clear skin, etc.

Sattvic foods include ghee, coconut oil, sprouted seeds, etc. These make the food tasty. Moreover, the good fats in the diet help in keeping your brain healthy and your memory sharp.

The most important thing is that although the sattvic diet is preferable, we do not know how to prepare them correctly. Siddha Spirituality of Swami Hardas Life System considers that during the entire process of food preparation, continuous Mantra of any God/Goddess as per the belief should be chanted within the mind. The food prepared this way not only make it tasty but when it is consumed by family members or guests, they too will gain health, peace, and progress, which would gradually lead to making life glorious.

Sattvic is derived from sattva (सत्त्व) which is a Sanskrit word. Sattva is a complex concept in Indian philosophy, which means:

Sattva is one of three Gunas (quality, peculiarity, tendency, attribute, property). The other two qualities are considered to be rajas (agitated, passionate, moving, emotional, trendy) and tamas (dark, destructive, spoiled, ignorant, stale, inertia, unripe, unnatural, weak, unclean). The concept that contrasts with and is opposed to sattva is Tamas.

Yoga includes recommendations on eating habits. Both the Śāṇḍilya Upanishad and Svātmārāma, an Indian yogi who lived during the 15th century, C.E. both state that Mitahara (eating in moderation) is an important part of yoga practice. It is one of the Yamas (virtuous self restraints). These texts while discussing yoga diet, however, make no mention of the sattvic diet.

In Yoga diet context, the virtue of Mitahara is one where the yogi is aware of the quantity and quality of food and drinks he or she consumes, takes neither too much nor too little, and suits it to one’s health condition and needs.

The application of sattva and tamas concepts to food is a later and relatively new extension to the Mitahara virtue in Yoga literature. Verses 1.57 through 1.63 of Hatha Yoga Pradipika suggest that taste cravings should not drive one’s eating habits; rather, the best diet is one that is tasty, nutritious and likable, as well as sufficient to meet the needs of one’s body.

It recommends that one must “eat only when one feels hungry” and “neither overeat nor eat to completely fill the capacity of one’s stomach; rather leave a quarter portion empty and fill three quarters with quality food and freshwater”.

After reading this article, what are your thoughts? Would you please put more efforts into enhancing or updating your knowledge? Let me know your precious thoughts.

The opinions expressed in this article are the personal opinions of the concerned site owners. Siddha Spirituality For Health is not responsible for the accuracy, completeness, suitability, or validity of any information on this article. However, it is advisable to consult a specialist in the concerned field before availing the benefits. Hence we do not assume any responsibility or liability for the same.