Gastroparesis (गैस्ट्रोपैरिसिस) also called delayed gastric emptying, is a medical disorder consisting of weak muscular contractions of the stomach, resulting in food and liquid remaining in the stomach for a prolonged period of time. Stomach contents thus exit more slowly into the duodenum of the digestive tract. Symptoms include nausea, vomiting, abdominal pain, feeling full soon after beginning to eat, abdominal bloating, and heartburn. The most common known mechanism is autonomic neuropathy of the nerve which innervates the stomach: the vagus nerve. Uncontrolled diabetes mellitus is a major cause of this nerve damage; other causes include post-infectious and trauma to the vagus nerve. Being gastroparesis is a critical disease, Siddha Spirituality of Swami Hardas Life System appeals to our valuable readers to know in-depth for well-being. 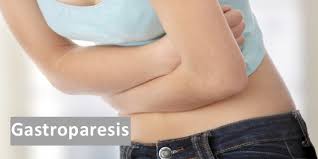 The most common symptoms of gastroparesis are the following:

Other symptoms include the following:

Vomiting may not occur in all cases, as sufferers may adjust their diets to include only small amounts of food.

Patients with cancer may develop gastroparesis because of chemotherapy-induced neuropathy, immunosuppression followed by viral infections involving the GI tract, procedures such as celiac blocks, paraneoplastic neuropathy or myopathy, or after an allogeneic bone marrow transplant via graft-versus-host disease.

Gastroparesis presents similar symptoms to slow gastric emptying caused by certain opioid medications, antidepressants, and allergy medications, along with high blood pressure. For patients already with gastroparesis, these can make the condition worse.

More than 50% of all gastroparesis cases are idiopathic in nature, with unknown causes. It is however frequently caused by autonomic neuropathy. This may occur in people with type 1 or type 2 diabetes, about 30-50% among long-standing diabetics. In fact, diabetes mellitus has been named as the most common cause of gastroparesis, as high levels of blood glucose may affect chemical changes in the nerves. The vagus nerve becomes damaged by years of high blood glucose or insufficient transport of glucose into cells resulting in gastroparesis. Adrenal and thyroid gland problems could also be a cause.

Gastroparesis has also been associated with connective tissue diseases such as scleroderma and Ehlers–Danlos syndrome, and neurological conditions such as Parkinson’s disease and multiple system atrophy. It may occur as part of mitochondrial disease. Opioids and anticholinergic medications can cause medication-induced gastroparesis.

Chronic gastroparesis can be caused by other types of damage to the vagus nerve, such as abdominal surgery. Heavy cigarette smoking is also a plausible cause since smoking causes damage to the stomach lining.

Gastroparesis sufferers are disproportionately female. One possible explanation for this finding is that women have an inherently slower stomach emptying time than men. A hormonal link has been suggested, as gastroparesis symptoms tend to worsen the week before menstruation when progesterone levels are highest. Neither theory has been proven definitively.

Gastroparesis can be diagnosed with tests such as barium x-rays, manometry, and gastric emptying scans. For the x-ray, the patient drinks a liquid containing barium after fasting which will show up in the x-ray and the physician is able to see if there is still food in the stomach as well. This can be an easy way to identify whether the patient has delayed emptying of the stomach.

In other cases or if the x-ray is inconclusive, the physician may have the patient eat a meal of toast, water, and eggs containing a radioactive isotope so they can watch as it is being digested and see how slowly the digestive tract is moving. This can be helpful for diagnosing patients who are able to digest liquids but not solid foods.

Complications of gastroparesis include:

Treatment includes dietary changes and, in some cases, restrictions on fat and/or solids. Eating smaller meals, spaced two to three hours apart has proved helpful. Avoiding foods like rice or beef that cause individual problems such as pain in the abdomen or constipation will help avoid symptoms.

Similarly, the dopamine receptor antagonist domperidone is used to treat gastroparesis. Erythromycin is known to improve the emptying of the stomach but its effects are temporary due to tachyphylaxis and wane after a few weeks of consistent use.

The antidepressant mirtazapine has proven effective in the treatment of gastroparesis unresponsive to conventional treatment. This is due to its antiemetic and appetite stimulant properties. Mirtazapine acts on the same serotonin receptor (5-HT3) as does the popular anti-emetic ondansetron.

In specific cases where treatment of chronic nausea and vomiting proves resistant to drugs, implantable gastric stimulation may be utilized.

Vertical sleeve gastrectomy, a procedure in which a part or all of the affected portion of the stomach is removed, has been shown to have some success in the treatment of gastroparesis in obese patients, even curing it in some instances.

In cases of postinfectious gastroparesis, patients have symptoms and go undiagnosed for an average of 3 weeks to 6 months before their illness is identified correctly and treatment begins.

Most cases of post-infectious gastroparesis are self‐limiting, with recovery within 12 months of initial symptoms, although some cases last well over 2 years. In children, the duration tends to be shorter and the disease course milder, than in adolescents and adults.

Diabetic gastropathy is usually slowly progressive and can become severe and lethal.

Everybody must practice Siddha preventive measures, whether a person is affected with gastroparesis or not, but preventive measures are the primary steps for switching on to any other Siddha remedies, and hence they are important. It helps in one’s capability, effectiveness, and productivity, decision making power, intellectuality, and removing minor health problems. There are three types of preventive measures:

This unique Siddha Shaktidata Yog of Siddha Spirituality can solve the problems related to gastroparesis with Siddha remedies. There is no compulsion of training of ‘Swami Hardas Life System’ methods. This not only gives benefits to self but also it can be used for other affected persons, whether a person is in the same house, distantly available in the same city, same nation or might be in any corner of the world, however, both the procedures have been explained here.

Recite this Sadhana with a Sankalp “My problems of gastroparesis are solved as early as possible and I should gain health” (जितनी जल्दी हो सके गैस्ट्रोपेरासिस की मेरी समस्याओं का निवारण हो और मुझे स्वास्थ्य हासिल हो ), which should be repeated in mind 3 – 3 times every after each stanza. Any person irrespective of caste, creed, religion, faith, sex, and age can recite this Sadhana for free, which should be repeated at least twice in a day. To know more, please click on this link.

These products work on the concepts of ‘Conceptual Creative Positive Energy’ (CCPE) within the provisions of the ‘CCPE Life System’ and the theory of Quantum Technology to a certain extent. However, the products get activated only whenever touched by a human and then they become capable of solving the problem and achieving health. However, please use these products for gastroparesis as mentioned below:

CCPE Booster: Keep one Booster over the Agya Chakra and another one each over the heart, and naval for 3 – 6 minutes. You may need to have 3 Boosters, which establishes positivity.

Along with all the above activities, apply above explained free Siddha remedies minimum 3 times a day, the more is good. Just try the methods of Siddha Spirituality of Swami Hardas Life System. I am confident that you will surely find improvements within 3 days.

In view of the above, I am confident that you have learned about gastroparesis, definition, symptoms, causes, diagnosis, complications, prognosis, and treatments. You also learned free Siddha remedies. Now, you have become self-sufficient, hence its right time to use your acquired knowledge for solving problems as per the provision available in Siddha Spirituality of Swami Hardas Life System.

However, keep learning and practicing the free Siddha remedies, which would help guide how to solve various problems regarding health, peace, and progress, without money and medicines.

After reading this article, how would you rate it? Would you please let me know your precious thoughts?

10 thoughts on “Gastroparesis And Siddha Remedies”