Radiation therapy (विकिरण चिकित्सा) or radiotherapy, often abbreviated RT, RTx, or XRT, is therapy using ionizing radiation, generally, as part of cancer treatment to control or kill malignant cells and normally delivered by a linear accelerator, which may be curative in a number of types of cancer if they are localized to one area of the body. It may also be used as part of adjuvant therapy, to prevent tumor recurrence after surgery to remove a primary malignant tumor, for example, early stages of breast cancer. Radiation therapy is synergistic with chemotherapy and has been used before, during, and after chemotherapy in susceptible cancers. Siddha Spirituality of Swami Hardas Life System considers this therapy useful and hence our readers are requested to read it carefully and also note it’s side-effects. 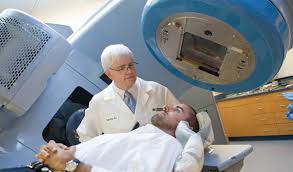 The purpose of this therapy is to kill or damage cancer cells. Radiation therapy is a common form of cancer therapy. It is used in more than half of all cancer cases, which can be used for:
For some kinds of cancers such as early-stage Hodgkin’s disease, non-Hodgkin’s lymphoma, and certain types of the prostate, or brain cancer, radiation therapy alone may cure the disease. In other cases, radiation therapy used in conjunction with surgery, chemotherapy, or both, increases survival rates over any of these therapies used alone.

The response of cancer to radiation is described by its radiosensitivity. Highly radiosensitive cancer cells are rapidly killed by modest doses of radiation. These include:

The majority of epithelial cancers are only moderately radiosensitive and require a significantly higher dose of radiation to achieve a radical cure. Some types of cancer are notably radioresistant, that is, much higher doses are required to produce a radical cure than may be safe in clinical practice.

Leukemias are not generally curable with radiation therapy, because they are disseminated through the body. Lymphoma may be radically curable if it is localized to one area of the body. Similarly, many of the common, moderately radio-responsive tumors are routinely treated with curative doses of radiation therapy if they are at an early stage. For example:

Metastatic cancers are generally incurable with radiation therapy because it is not possible to treat the whole body.

Before treatment, a CT scan is often performed to identify the tumor and surrounding normal structures. The patient receives small skin marks to guide the placement of treatment fields. Patient positioning is crucial at this stage as the patient will have to be set-up in the identical position during treatment.

Another technique is to enhance the radiosensitivity of cancer by giving certain drugs during a course of radiation therapy.

Examples of radiosensitizing drugs include:

The impact of radiotherapy varies between different types of cancer and different groups. For example, for breast cancer after breast-conserving surgery, radiotherapy has been found to halve the rate at which the disease recurs.

Radiation therapy is in itself painless. Many low-dose palliative treatments, for example, radiation therapy to bony metastases, cause minimal or no side effects, although short-term pain flare-up can be experienced in the days following treatment due to edema compressing nerves in the treated area.

Higher doses can cause varying side effects during treatment, in the months or years following treatment, or after re-treatment. The nature, severity, and longevity of side effects depend on the organs that receive the radiation, the treatment itself e.g. a type of radiation, dose, fractionation, concurrent chemotherapy, and the patient.

The main side effects reported are fatigue and skin irritation, like a mild to moderate sunburn. The fatigue often sets in during the middle of a course of treatment and can last for weeks after treatment ends. The irritated skin will heal, but may not be as elastic as it was before.

Mechanistically nausea and vomiting is associated only with treatment of the stomach or abdomen, or with radiation therapy to certain nausea-producing structures in the head during treatment of certain head and neck tumors, most commonly the vestibules of the inner ears. As with any distressing treatment, some patients vomit immediately during radiotherapy, or even in anticipation of it, but this is considered a psychological response. Nausea for any reason can be treated with antiemetics.

Damage to the epithelial surfaces

Damages may sustain from radiation therapy. Depending on the area being treated, this may include the skin, oral mucosa, pharyngeal, bowel mucosa, and ureter. The rates of onset of damage and recovery from it depend upon the turnover rate of epithelial cells. Typically the skin starts to become pink and sore several weeks into treatment. The reaction may become more severe during the treatment and for up to about one week following the end of radiation therapy, and the skin may break down.

Mouth, throat, and stomach sores are treated, temporary soreness and ulceration commonly occur in the mouth and throat. If severe, this can affect swallowing, and the patient may need painkillers and nutritional support/food supplements. The esophagus can also become sore if it is treated directly, or if, as commonly occurs, it receives a dose of collateral radiation during the treatment of lung cancer.

The swelling of soft tissues may cause problems during radiation therapy. This is a concern during the treatment of brain tumors and brain metastases, especially where there is pre-existing raised intracranial pressure or where the tumor is causing near-total obstruction of a lumen. Surgical intervention may be considered prior to treatment with radiation.

The gonads i.e. ovaries and testicles are very sensitive to radiation. They may be unable to produce gametes following direct exposure to most normal treatment doses of radiation. Treatment planning for all body sites is designed to minimize, if not completely exclude dose to the gonads if they are not the primary area of treatment.

There are rigorous procedures in place to minimize the risk of accidental overexposure of radiation therapy to patients. However, mistakes do occasionally occur; for example, the radiation therapy machine Therac-25 was responsible for at least six accidents between 1985 and 1987, where patients were given up to one hundred times the intended dose; two people were killed directly by the radiation overdoses.

From 2005 to 2010, a hospital in Missouri overexposed 76 patients, most with brain cancer, during a five-year period because new radiation equipment had been set up incorrectly.

Radiation therapy works by damaging the DNA of cancerous cells. This DNA damage is caused by one of two types of energy, photon or charged particle. This damage is either direct or indirect ionization of the atoms which make up the DNA chain. Indirect ionization happens as a result of the ionization of water, forming free radicals, notably hydroxyl radicals, which then damage the DNA.

Historically, the three main divisions of radiation therapy are:

The differences relate to the position of the radiation source; external is outside the body, brachytherapy uses sealed radioactive sources placed precisely in the area under treatment, and systemic radioisotopes are given by infusion or oral ingestion.

It is delivered by placing radiation source inside or next to the area requiring treatment. Brachytherapy is commonly used as an effective treatment for cervical, prostate, breast, and skin cancer and can also be used to treat tumors in many other body sites.

Systemic radioisotope therapy (RIT) is a form of targeted therapy. Targeting can be due to the chemical properties of the isotope such as radioiodine which is specifically absorbed by the thyroid gland a thousandfold better than other bodily organs.

Intraoperative radiation therapy (IORT) is applying therapeutic levels of radiation to a target area, such as a cancer tumor, while the area is exposed during surgery.

Deep inspiration breath-hold (DIBH) is a method of delivering radiotherapy while limiting radiation exposure to the heart and lungs. It is used primarily for treating left-sided breast cancer. The technique involves a patient holding their breath during treatment.

9 thoughts on “Radiation Therapy Utility and Side Effects”