Anorexia (एनोरेक्सिया), is also referred to as anorexia nervosa, is an eating disorder, characterized by low weight, food restriction, fear of weight gain, and a strong desire to be thin. Many people with anorexia see themselves as overweight even though they are, in fact, underweight. They weigh themselves frequently, eat small amounts, and only eat certain foods. Some will exercise excessively, force themselves to vomit, or use laxatives to produce weight loss. Complications may include osteoporosis, infertility, and heart damage among others. Women will often stop having menstrual periods. Siddha Spirituality of Swami Hardas Life System warns our precious readers to know the disadvantages of anorexia, which ultimately leads to death. Hence, read this article attentively and save yourself from health-loss.

Anorexia or anorexia nervosa is an illness in which a person refuses to eat enough because they have a fear of becoming fat. (ऐसी बीमारी जिसमें व्यक्ति मोटे होने के डर से खाने से इनकार करता है).

An eating disorder characterized by markedly reduced appetite or total aversion to food. Anorexia is a serious psychological disorder. It is a condition that goes well beyond out-of-control dieting. A person with anorexia, most often a girl or young woman, initially begins dieting to lose weight. Over time, weight-loss becomes a sign of mastery and control. The drive to become thinner is thought to be secondary to concerns about control and fears relating to one’s body. The individual continues the endless cycle of restrictive eating, often to a point close to starvation. This becomes an obsession and is similar to an addiction to a drug.

Anorexia nervosa and the associated malnutrition that results from self-imposed starvation can cause complications in every major organ system in the body. Hypokalaemia, a drop in the level of potassium in the blood, is a sign of anorexia nervosa. A significant drop in potassium can cause:

Other comorbid conditions include:

Depression and anxiety are the most common comorbidities, and depression is associated with a worse outcome.

Autism spectrum disorders occur more commonly among people with eating disorders than in the general population.

There is evidence for biological, psychological, developmental, and sociocultural risk factors, but the exact cause of eating disorders is unknown.

Anorexia nervosa is highly heritable. Twin studies have shown a heritability rate of between 28 and 58%. First degree relative of those with anorexia has roughly 12 times the risk of developing anorexia. Association studies have been performed, studying 128 different polymorphisms related to 43 genes including genes involved in the regulation of eating behavior, motivation and reward mechanics, personality traits and emotion.

Altered signaling of peptides that facilitate communication between the gut, brain and adipose tissue, such as ghrelin, leptin, neuropeptide Y and orexin, may contribute to the pathogenesis of anorexia nervosa by disrupting the regulation of hunger and satiety.

People with gastrointestinal disorders may be more at risk of developing disorders eating practices than the general population, principally restrictive eating disturbances. An association of anorexia nervosa with celiac disease has been found. The role that gastrointestinal symptoms play in the development of eating disorders seems rather complex.

Early theories of the cause of anorexia-linked it to childhood sexual abuse or dysfunctional families; the evidence is conflicting, and well-designed research is needed.

The fear of food is known as Sitophobia, Cibophobia, or sitophobia and is part of the differential diagnosis. Other psychological causes of anorexia include:

Anorexia nervosa has been increasingly diagnosed since 1950; the increase has been linked to vulnerability and internalization of body ideals. People in professions where there is a particular social pressure to be thin e.g. models and dancers were more likely to develop anorexia.

Constant exposure to media that presents body ideals may constitute a risk factor for body dissatisfaction and anorexia nervosa. The cultural ideal for body shape for men versus women continues to favor slender women and athletic, V-shaped muscular men.

The media give men and women a false view of what people truly look like. In magazines, movies and even on billboards most of the actors/models are digitally altered in multiple ways. People then strive to look like these “perfect” role models when in reality they aren’t anywhere near perfection themselves.

Anorexia nervosa is classified under the Feeding and Eating Disorders in the latest revision of the Diagnostic and Statistical Manual of Mental Disorders (DSM 5).

Although restoring the person’s weight is the primary task at hand, the optimal treatment also includes and monitors behavioral change in the individual as well. There is some evidence that hospitalization might adversely affect long term outcomes.

Diet is the most essential factor to work on in people with anorexia nervosa and must be tailored to each person’s needs. Food variety is important when establishing meal plans as well as foods that are higher in energy density. People must consume adequate calories, starting slowly, and increasing at a measured pace. Evidence of a role for zinc supplementation during refeeding is unclear.

Cognitive-behavioral therapy (CBT) is useful in adolescents and adults with anorexia nervosa; acceptance and commitment therapy is a type of CBT, which has shown promise in the treatment of AN. Cognitive remediation therapy (CRT) is used in treating anorexia nervosa.

The rate of refeeding can be difficult to establish because the fear of refeeding syndrome (RFS) can lead to underfeeding. It is thought that RFS, with falling phosphate and potassium levels, is more likely to occur when BMI is very low, and when medical comorbidities such as infection or cardiac failure, are present. 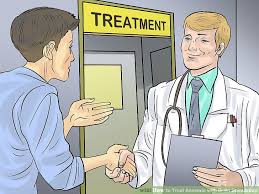 AN has the highest mortality rate of any psychological disorder. The mortality rate is 11 to 12 times greater than in the general population, and the suicide risk is 56 times higher. Half of the women with AN achieve a full recovery, while an additional 20–30% may partially recover.

Not all people with anorexia recover completely: about 20% develop anorexia nervosa as a chronic disorder. If anorexia nervosa is not treated, serious complications such as heart conditions and kidney failure can arise and eventually lead to death.

Anorexia nervosa can have serious implications if its duration and severity are significant and if onset occurs before the completion of growth, pubertal maturation, or the attainment of peak bone mass. Complications specific to adolescents and children with anorexia nervosa can include the following:

Anorexia nervosa causes alterations in the female reproductive system; significant weight loss, as well as psychological stress and intense exercise, typically results in a cessation of menstruation in women who are past puberty.

Hepatic steatosis, or fatty infiltration of the liver, can also occur and is an indicator of malnutrition in children. Neurological disorders that may occur as complications include seizures and tremors. Wernicke encephalopathy, which results from vitamin B1 deficiency, has been reported in patients who are extremely malnourished.

The most common gastrointestinal complications of anorexia nervosa are delayed stomach emptying and constipation, but also include:

Anorexia nervosa increases the risk of sudden cardiac death, though the precise cause is unknown. Cardiac complications include structural and functional changes to the heart. Some of these cardiovascular changes are mild and are reversible with treatment, while others may be life-threatening. Cardiac complications can include:

Some individuals may also have a decrease in cardiac contractility. Cardiac complications can be life-threatening, but the heart muscle generally improves with weight gain, and the heart normalizes in size over weeks to months, with recovery.

Everybody must practice Siddha preventive measures, whether a person is affected with anorexia or not, but preventive measures are the primary steps for switching on to any other Siddha energy remedies, and hence they are important. It helps in one’s capability, effectiveness, and productivity, decision making power, intellectuality and removing minor health problems. There are three types of preventive measures:

This unique Siddha Shaktidata Yog of Siddha Spirituality can solve the problems related to anorexia with free Siddha energy remedies. There is no compulsion of training of ‘Swami Hardas Life System’ methods. This not only gives benefits to self but also it can be used for other affected persons, whether a person is in the same house, distantly available in the same city, same nation or might be in any corner of the world, however, both the procedures have been explained here.

Recite this Sadhana with a Sankalp “My problems of anorexia are solved as early as possible and I should gain health”, which should be repeated in mind 3 – 3 times every after each stanza. Any person irrespective of caste, creed, religion, faith, sex, and age can recite this Sadhana for free, which should be repeated at least twice in a day. To know more, please click on this link.

These products work on the concepts of ‘Conceptual Creative Positive Energy’ (CCPE) within the provisions of the ‘CCPE Life System’ and the theory of Quantum Technology to a certain extent. However, the products get activated only whenever touched by a human and then they become capable of solving the problem and achieving health. However, please use these products for anorexia as mentioned below:

CCPE Booster: Keep one Booster over the Agya Chakra and another one each over the head, heart and naval for 3 – 6 minutes. You may need to have 4 Boosters, which establishes positivity.

In view of the above, I am confident that you have learned about anorexia, meaning, definition, symptoms, causes, diagnosis, prognosis, and treatments. You also learned free Siddha energy remedies. Now, you have become self-sufficient, hence its right time to use your acquired knowledge for solving problems as per the provision available in Siddha Spirituality of Swami Hardas Life System.

After reading this article, what are your thoughts? Would you please let me know your precious thoughts?