The digestive system (पाचन तंत्र) of humans consists of the gastrointestinal tract plus the accessory organs of digestion i.e. the tongue, salivary glands, pancreas, liver, and gallbladder. Digestion involves the breakdown of food into smaller and smaller components until they can be absorbed and assimilated into the body. The process of digestion has three stages. The cephalic phase of digestion begins with gastric secretions in response to the sight and smell of food. This stage includes the mechanical breakdown of food by chewing, and the chemical breakdown by digestive enzymes, that takes place in the mouth. The digestive system is one of the most important systems of humans, hence Siddha Spirituality of Swami Hardas Life System wishes our valuable readers to read this article and know in-depth about for wellbeing.

The system of organs responsible for getting food into and out of the body and for making use of food to keep the body healthy. The digestive system includes the salivary glands, mouth, esophagus, stomach, liver, gallbladder, pancreas, small intestine, colon, and rectum.

There are several organs and other components involved in the digestion of food. The organs known as the accessory digestive organs are:

The largest structure of the digestive system is the gastrointestinal tract (GI tract). This starts at the mouth and ends at the anus, covering a distance of about nine meters.

The largest part of the GI tract is the colon or large intestine. Water is absorbed here and the remaining waste matter is stored prior to defecation.

Most of the digestion of food takes place in the small intestine which is the longest part of the GI tract.

A major digestive organ is a stomach. Within its mucosa are millions of embedded gastric glands. Their secretions are vital to the functioning of the organ.

There are many specialized cells in the GI tract. These include:

Some parts of the digestive system are also part of the excretory system, including the large intestine.

The mouth is the first part of the upper gastrointestinal tract and is equipped with several structures that begin the first processes of digestion. These include:

There are three pairs of main salivary glands and between 800 and 1,000 minor salivary glands, all of which mainly serve the digestive process, and also play an important role in the maintenance of dental health and general mouth lubrication, without which speech would be impossible. The main glands are all exocrine glands, secreting viaducts. All of these glands terminate in the mouth. The largest of these are the parotid glands—their secretion is mainly serous.

The next pair are underneath the jaw, the submandibular glands, these produce both serous fluid and mucus. The serous fluid is produced by serous glands in these salivary glands which also produce lingual lipase. They produce about 70% of the oral cavity saliva. The third pair are the sublingual glands located underneath the tongue and their secretion is mainly mucous with a small percentage of saliva.

Saliva moistens and softens food, and along with the chewing action of the teeth, transforms the food into a smooth bolus. Also of importance is the presence in the saliva of the digestive enzymes amylase and lipase.

Amylase starts to work on the starch in carbohydrates, breaking it down into the simple sugars of maltose and dextrose that can be further broken down in the small intestine. Saliva is the mouth that can account for 30% of this initial starch digestion. Lipase starts to work on breaking down fats. Lipase is further produced in the pancreas where it is released to continue this digestion of fats. The presence of salivary lipase is of prime importance in young babies whose pancreatic lipase has yet to be developed.

Food enters the mouth where the first stage in the digestive process takes place, with the action of the tongue and the secretion of saliva. The tongue is a fleshy and muscular sensory organ, and the very first sensory information is received via the taste buds in the papillae on its surface. If the taste is agreeable, the tongue will go into action, manipulating the food in the mouth which stimulates the secretion of saliva from the salivary glands.

It is a form of chemoreception that takes place in the specialized taste receptors, contained in structures called taste buds in the mouth. Taste-buds are mainly on the upper surface of the tongue. There are also taste buds on the epiglottis and upper part of the esophagus. Taste messages are sent via these cranial nerves to the brain.

The brain can distinguish between the chemical qualities of the food. However, the five basic tastes include:

The detection of saltiness and sourness enables the control of salt and acid balance. The detection of bitterness warns of poisons—many of a plant’s defenses are of poisonous compounds that are bitter. Sweetness guides to those foods that will supply energy; the initial breakdown of the energy-giving carbohydrates by salivary amylase creates the taste of sweetness since simple sugars are the first result.

Teeth are complex structures made of materials specific to them. They are made of a bone-like material called dentin, which is covered by the hardest tissue in the body—enamel. Teeth have different shapes to deal with different aspects of mastication employed in tearing and chewing pieces of food into smaller and smaller pieces. This results in a much larger surface area for the action of digestive enzymes.

The pharynx is a part of the conducting zone of the respiratory system and also a part of the digestive system. It is the part of the throat immediately behind the nasal cavity at the back of the mouth and above the esophagus and larynx. 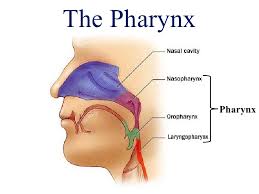 The esophagus, commonly known as the food pipe or gullet, consists of a muscular tube through which food passes from the pharynx to the stomach. The esophagus is continuous with the laryngopharynx. It passes through the posterior mediastinum in the thorax and enters the stomach through a hole in the thoracic diaphragm—the esophageal hiatus, at the level of the tenth thoracic vertebra (T10).

Its length averages 25 cm, varying with an individual’s height. It is divided into cervical, thoracic and abdominal parts. The pharynx joins the esophagus at the esophageal inlet which is behind the cricoid cartilage. 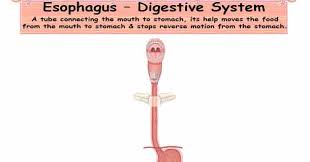 The stomach is a major organ of the gastrointestinal tract and digestive system. Gastric acid, produced in the stomach plays a vital role in the digestive process, and mainly contains hydrochloric acid and sodium chloride.

The spleen is the largest lymphoid organ in the body but has other functions. It breaks down both red and white blood cells that are spent. A product of this digestion is the pigment bilirubin, which is sent to the liver and secreted in the bile.

The liver is the second largest organ after the skin and is an accessory digestive gland that plays a role in the body’s metabolism, which has many functions some of which are important to digestion. It can detoxify various metabolites; synthesize proteins and produce biochemicals needed for digestion. It regulates the storage of glycogen which can form from glucose. The liver can also synthesize glucose from certain amino acids.

Bile produced by the liver is made up of water (97%), bile salts, mucus and pigments, 1% fats and inorganic salts. Bilirubin is its major pigment. Bile acts partly as a surfactant which lowers the surface tension between either two liquids or a solid and a liquid and helps to emulsify the fats in the chyme. Food fat is dispersed by the action of bile into smaller units called micelles. The breaking down into micelles creates a much larger surface area for the pancreatic enzyme, lipase to work on.

The gallbladder is a hollow part of the biliary tract that sits just beneath the liver, with the gallbladder body resting in a small depression. It is a small organ where the bile produced by the liver is stored, before being released into the small intestine. Bile flows from the liver through the bile ducts and into the gallbladder for storage, which is divided into three sections:

The pancreas is a major organ functioning as an accessory digestive gland in the digestive system. It is both an endocrine gland and an exocrine gland. The endocrine part secretes insulin when the blood sugar becomes high; insulin moves glucose from the blood into the muscles and other tissues for use as energy.

The endocrine part releases glucagon when the blood sugar is low; glucagon allows stored sugar to be broken down into glucose by the liver in order to re-balance the sugar levels. The pancreas produces and releases important digestive enzymes in the pancreatic juice that it delivers to the duodenum.

Partially digested food starts to arrive in the small intestine as semi-liquid chyme, one hour after it is eaten. After two hours the stomach has emptied.

In the large intestine, the passage of the digesting food in the colon is a lot slower, taking from 12 to 50 hours until it is removed by defecation. The colon mainly serves as a site for the fermentation of digestible matter by the gut flora. The time taken varies considerably between individuals. The remaining semi-solid waste is termed feces and is removed by the coordinated contractions of the intestinal walls, termed peristalsis, which propels the excreta forward to reach the rectum and exit via defecation from the anus.

There are three main divisions:

The celiac artery supplies the liver, stomach, spleen and the upper 1/3 of the duodenum and the pancreas with oxygenated blood.

The next branch from the abdominal aorta is the superior mesenteric artery, which supplies the regions of the digestive tract derived from the midgut, which includes:

The final branch which is important for the digestive system is the inferior mesenteric artery, which supplies the regions of the digestive tract derived from the hindgut, which includes:

The enteric nervous system consists of some one hundred million neurons that are embedded in the peritoneum, the lining of the gastrointestinal tract extending from the esophagus to the anus.

Early in embryonic development, the embryo has three germ layers and abuts a yolk sac. During the second week of development, the embryo grows and begins to surround and envelop portions of this sac. The enveloped portions form the basis for the adult gastrointestinal tract. Sections of this foregut begin to differentiate into the organs of the gastrointestinal tract, such as the esophagus, stomach, and intestines.

During the fourth week of development, the stomach rotates. The stomach, originally lying in the midline of the embryo, rotates so that its body is on the left. This rotation also affects the part of the gastrointestinal tube immediately below the stomach, which will go on to become the duodenum.

By the end of the fourth week, the developing duodenum begins to spout a small outpouching on its right side, the hepatic diverticulum, which will go on to become the biliary tree. Just below this is a second outpouching, known as the cystic diverticulum, that will eventually develop into the gallbladder.

Some digestive diseases and conditions are acute, lasting only a short time, while others are chronic, or long-lasting. Some of them include:

9 thoughts on “Digestive System And Diseases”