A most suitable diet for diabetic (मधुमेह के लिए आहार) is a diet that is used by people with diabetes mellitus or high blood glucose to minimize symptoms, most notably high blood glucose, and dangerous consequences of the disease. Since carbohydrate is the macronutrient that raises blood glucose levels most significantly, the greatest debate is how low in carbohydrates the diet should be. This is because although lowering carbohydrate intake will help reduce blood glucose levels, low-carbohydrate diet conflicts with the traditional establishment view that carbohydrates should be the main source of calories. Siddha Spirituality of Swami Hardas Life System considers diabetic diet awareness essential for diabetics. Hence, let us know and follow the wisdom of diet.

A special course of food to which a person restricts themselves, either to lose weight or for medical reasons e.g. diabetes, etc.

Fat has often been blamed for obesity. Yet, people who eat a diet high in fat — but low in carbs — end up eating fewer calories than people on a low-fat, high-carb diet.

It is important to note that carbohydrates from sugar (added or natural as in fruit juices, etc.) or starch (rice, potatoes, bread, pasta, including “brown” or “whole-grain”) are the primary culprit in raising blood glucose, while some low glycemic index vegetables have much less of an effect on blood glucose, and may even be beneficial for diabetics in the long-term by improving insulin sensitivity.

Recommendations of the fraction of total calories to be obtained from carbohydrate are generally in the range of 20% to 45%, but recommendations can vary as widely as from 16% to 75%.

For overweight and obese people with Type 2 diabetes, any weight-loss diet that the person will adhere to and achieve weight loss on is at least partly effective.

The most agreed-upon recommendation is for the diet to be low in sugar and refined carbohydrates, while relatively high in dietary fiber, especially soluble fiber. Diabetes affected people are also encouraged to eat small frequent meals a day. Likewise, people with diabetes may be encouraged to reduce their intake of carbohydrates that have a high glycemic index (GI), although this is also controversial.

In cases of hypoglycemia, they are advised to have food or drink that can raise blood glucose quickly, such as a sugary sports drink, followed by a long-acting carbohydrate (such as rye bread to prevent the risk of further hypoglycemia.) Others question the usefulness of the glycemic index and recommend high-GI foods like potatoes and rice. It has been claimed that oleic acid has a slight advantage over linoleic acid in reducing plasma glucose.

In the 1950s, the American Diabetes Association, in conjunction with the U.S. Public Health Service, introduced the “exchange scheme”. This allowed people to swap foods of similar nutrition value (e.g., carbohydrate) for another. For example, if wishing to have more than normal carbohydrates for dessert, one could cut back on potatoes in one’s first course. The exchange scheme was revised in 1976, 1986, and 1995.

Not all diabetes dietitians today recommend the exchange scheme. Instead, they are likely to recommend a typical healthy diet:

An approach that has been popular with some people with type 1 diabetes mellitus since 2000 is known as DAFNE (Dose Adjustment for Normal Eating). This approach involves estimating the number of carbohydrates in a meal and modifying the amount of insulin one injects accordingly.

The American Diabetes Association in 1994 recommended that 60–70% of caloric intake should be in the form of carbohydrates. As mentioned above, this is controversial, with some researchers claiming that 40% or less is better, while others claim benefits for a high-fiber, 75% carbohydrate diet.

What has not generally been included in diabetic diet recommendations is the variation in effect from different carbohydrates. It has been recommended that carbohydrates eaten by people with diabetes should be complex carbohydrates.

There is a lack of evidence of the usefulness of low-carbohydrate dieting for people with type 1 diabetes. Although for certain individuals it may be feasible to follow a low-carbohydrate regime combined with carefully-managed insulin dosing, this is hard to maintain and there are concerns about potential adverse health effects caused by the diet. In general people with type 1 diabetes are advised to follow an individualized eating plan rather than a pre-decided one.

The ADA recommends people with diabetes should be “developing healthy eating patterns rather than focusing on individual macronutrients, micronutrients, or single foods”. They recommended that the carbohydrate in a diet should come from:

According to The American Diabetes Association (ADA), a vegan diet is a healthful option for all ages. In the ADA’s 2018 Standards of Medical Care in Diabetes, a vegan diet was included as a treatment option. Diabetes UK says that diabetes should not prevent people from going vegetarian and that it may be beneficial for people with diabetes to go vegetarian, as this will cut down on saturated fats.

For people with diabetes, healthy eating is not simply a matter of “what one eats”, but also when one eats.

If patients check their blood glucose at bedtime and find that it is low, for example below 6 millimoles per liter (108 mg/dL), it is advisable that they take some long-acting carbohydrate before retiring to bed to prevent night-time hypoglycemia. Night sweats, headaches, restless sleep, and nightmares can be a sign of nocturnal hypoglycemia, and patients should consult their doctor for adjustments to their insulin routine if they find that this is the case.

Counterintuitively, another possible sign of nocturnal hypoglycemia is morning hyperglycemia, which actually occurs in response to blood sugar getting too low at night. This is called the Somogyi effect.

In relation to type 2 diabetes, eating most food earlier in the day may be associated with lower levels of overweight and obesity and other factors that reduce the risk of developing type 2 diabetes.

Diabetes UK has warned against the purchase of products that are specially made for people with diabetes, on grounds that:

It should be noted that NICE (the National Institute for Health and Clinical Excellence in the United Kingdom) advises doctors and other health professionals to “Discourage the use of foods marketed specifically for people with diabetes”.

Research has shown the Maitake mushroom (Grifola frondosa) has a hypoglycemic effect and may be beneficial for the management of diabetes. Maitake lowers blood sugar because the mushroom naturally acts as an alpha-glucosidase inhibitor. Other mushrooms like lingzhi, Agaricus blazei, Agrocybe cylindracea, and Cordyceps have been noted to lower blood sugar levels to a certain extent, although the mechanism is currently unknown. 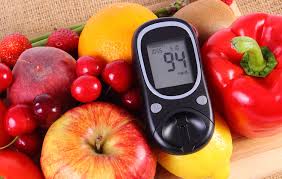 Alcohol inhibits glycogenesis in the liver and some drugs inhibit hunger symptoms. This, with impaired judgment, memory and concentration caused by some drugs can lead to hypoglycemia. People with diabetes who take insulin or tablets such as sulphonylureas should not, therefore, consume alcohol on an empty stomach but take some starchy food (such as bread or potato crisps) at the same time as consumption of alcohol.

The Pritikin Diet consists of fruit, vegetables, whole grains, and so on, and is high in carbohydrates and roughage. The diet is accompanied by exercise.

Lowering the glycemic index of one’s diet can improve the control of diabetes. This includes avoidance of such foods as potatoes cooked in certain ways and white bread.

Removal of carbohydrates from the diet and replacement with fatty foods may help reverse diabetes such as:

Fats would become the primary calorie source for the body, and complications due to insulin resistance would be minimized.

It has been shown that a high fiber diet works better than the diet recommended by the American Diabetes Association in controlling diabetes and may control blood sugar levels with the same efficacy as oral diabetes drugs.

This has been shown to improve glucose tolerance in people with diabetes type 2, ischemic heart disease and glucose intolerance, and in healthy pigs.

1 cup of green tea / Tea with low- fat milk with some gluten-free snacks.

1 tsp Trufiber with 1 glass of Buttermilk.

Anyone of the following: 1 glass Truweight Shake-a-Day mixed with water or low-fat milk; or omega-3 laddoos or 1 fistful of almonds, and walnuts or 1 whole wheat no-oil methi chakra.

1 glass of low-fat milk with a pinch of cinnamon.

Remember, this is a sample Indian diet plan for diabetes incorporating Truweight’s superfoods.

5 thoughts on “Diet For Diabetic Wellbeing”