The respiratory system (श्वसन प्रणाली) is a biological system consisting of specific organs and structures used for gas exchange in animals and plants. The anatomy and physiology that make this happen vary greatly, depending on the size of the organism, the environment in which it lives and its evolutionary history. In-land animals the respiratory surface is internalized as linings of the lungs. As well all know, without the respiratory system, no one can live longer. Hence, Siddha Spirituality of Swami Hardas Life System appeals to our valuable readers to know it’s a mechanism. 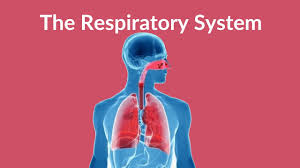 The branching airways of the lower tract are often described as the respiratory tree or tracheobronchial tree. The intervals between successive branch points along the various branches of “tree” are often referred to as branching “generations”, of which there are, in the adult human about 23.

The earlier generations, consisting of the trachea and the bronchi, as well as the larger bronchioles which simply act as air conduits, bringing air to the respiratory bronchioles, alveolar ducts, and alveoli, where gas exchange takes place. Bronchioles are defined as the small airways lacking any cartilagenous support.

The rates at which air is breathed in or out, either through the mouth or nose or into or out of the alveoli are tabulated below, together with how they are calculated. The number of breath cycles per minute is known as the respiratory rate.

In mammals, inhalation at rest is primarily due to the contraction of the diaphragm. This is an upwardly domed sheet of muscle that separates the thoracic cavity from the abdominal cavity. When it contracts the sheet flattens, increasing the volume of the thoracic cavity.

Mammals only use their abdominal muscles only during forceful exhalation. Never during any form of inhalation.

The volume of air that moves in or out during a single breathing cycle is called the tidal volume. In a resting adult human, it is about 500 ml per breath. At the end of exhalation, the airways contain about 150 ml of alveolar air which is the first air that is breathed back into the alveoli during inhalation.

During heavy breathing, as, for instance, during exercise, inhalation is brought about by a more powerful and greater excursion of the contracting diaphragm than at rest. In addition, the “accessory muscles of inhalation” exaggerate the actions of the intercostal muscles. These accessory muscles of inhalation are muscles that extend from the cervical vertebrae and base of the skull to the upper ribs and sternum, sometimes through an intermediary attachment to the clavicles.

This blood gas barrier is extremely thin in humans, on average, 2.2 μm thick. It is folded into about 300 million small air sacs called alveoli, each between 75 and 300 µm in diameter, branching off from the respiratory bronchioles in the lungs, thus providing an extremely large surface area, approximately 145 m2 for gas exchange to occur.

Ventilation of the lungs in mammals occurs via the respiratory centers in the medulla oblongata and the pons of the brainstem. These areas form a series of neural pathways that receive information about the partial pressures of oxygen and carbon dioxide in the arterial blood. This information determines the average rate of ventilation of the alveoli of the lungs, to keep these pressures constant. The respiratory center does so via motor nerves which activate the diaphragm and other muscles of respiration.

The alveoli are open to the atmosphere, with the result that alveolar air pressure is exactly the same as the ambient air pressure at sea level, at altitude, or in any artificial atmosphere e.g. a diving chamber, or decompression chamber in which the individual is breathing freely.

With the expansion of the lungs through lowering of the diaphragm and expansion of the thoracic cage, the alveolar air now occupies a larger volume, and its pressure falls proportionally, causing air to flow in from the surroundings, through the airways, till the pressure in the alveoli is once again at the ambient air pressure. The reverse obviously happens during exhalation. This process is exactly the same at sea level, as on top of Mt. Everest, or in a diving chamber or decompression chamber.

Irritation of nerve endings within the nasal passages or airways can induce a cough reflex and sneezing. These responses cause air to be expelled forcefully from the trachea or nose, respectively. In this manner, irritants caught in the mucus which lines the respiratory tract are expelled or moved to the mouth where they can be swallowed.

Most of the respiratory system is lined with mucous membranes that contain mucosa-associated lymphoid tissue, which produces white blood cells such as lymphocytes.

The lungs make a surfactant, a surface-active lipoprotein complex formed by type II alveolar cells. It floats on the surface of the thin watery layer which lines the insides of the alveoli, reducing the water’s surface tension.

Pre-term babies who are unable to manufacture surfactants have lungs that tend to collapse each time they breathe out. Unless treated, this condition, called respiratory distress syndrome, is fatal.

The lung vessels contain a fibrinolytic system that dissolves clots that may have arrived in the pulmonary circulation by embolism, often from the deep veins in the legs. They also release a variety of substances that enter the systemic arterial blood, and they remove other substances from the systemic venous blood that reach them via the pulmonary artery. Some prostaglandins are removed from the circulation, while others are synthesized in the lungs and released into the blood when lung tissue is stretched.

The movement of gas through the larynx, pharynx, and mouth allows humans to speak, or phonate. Vocalization, or singing, in birds occurs via the syrinx, an organ located at the base of the trachea. The vibration of air flowing across the larynx, in humans, and the syrinx, in birds, results in sound. Because of this, the gas movement is vital for communication purposes.

Panting in dogs, cats, birds and some other animals provide a means of reducing body temperature, by evaporating saliva in the mouth instead of evaporating sweat on the skin.

Disorders of the respiratory system can be classified into several general groups:

Disorders of the respiratory system are usually treated by a pulmonologist and respiratory therapist.

Where there is an inability to breathe or insufficiency in breathing a medical ventilator may be used.